Kenda tires will return as the presenting sponsor and official tire of the Red Bull Tennessee Knockout for 2022. Forty-seven percent of the racers competed on Kenda tires at the 2021 TKO event, making it the most popular tire brand by a large margin.

“Kenda has been a partner with the Tennessee Knockout since the first event in 2011 and as the event grows, our market share in extreme enduro grows with it,” said Dave Komoroski, Director of Powersports at Kenda. “We’re enthusiasts first and foremost. In fact, a couple of our Ohio-based engineers are competing this year. It’s rewarding to see our work paying off as more and more riders choose to ride Kenda.”

Kenda will have a tire service crew at the Tennessee Knockout ready to help all the riders choose and mount the best options.

You can learn more about Kenda tires here.

There are still entries available for the Saturday amateur classes, including the new ECR eMoto class. Click here to enter. 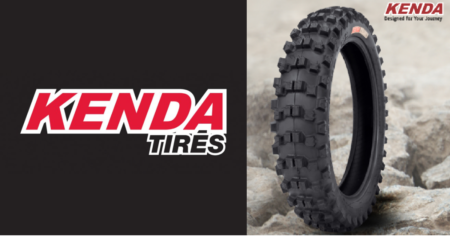 Kenda has been a partner with the Tennessee Knockout (TKO) since the inaugural event in 2011. At that time, a small fraction of the competitors used Kenda tires, but the brand continued to develop and market new tires aimed at extreme off-road, and in 2020, a whopping 52% of the competitors raced on Kenda tires. While Red Bull has taken over the title sponsorship position to help grow the event and increase the exposure worldwide via Red Bull TV, Kenda will continue as the presenting sponsor and official tire of the Red Bull Tennessee Knockout.

“The Tennessee Knockout has become one of the premier off-road motorcycle events in the US and we are happy to continue to help extreme off-road motorcycle racing grow in popularity,” said Jason Baldwin, Director of Powersports at Kenda. “We are proud to have so many of the extreme off-road racers choose Kenda and the new Knarly tire is winning at the top level with Cody Webb and the Sherco team. We are happy to provide the tires that help riders get through the tough stuff.”

Kenda will have a tire service crew at the Tennessee Knockout ready to help all the riders choose the best options.

You can learn more about Kenda tires here.

TKO sponsor Kenda Tires will be on-site again this year with a selection of enduro tires and miscellaneous services. Here are the details from Kenda’s Tim Anderson:

Kenda tires will be available at the TKO in Sequatchie TN again this year. With Kenda’s new expanded Extreme Enduro tire line-up, your choice is huge. Unless you have been living under a rock, Cody Webb has been killing it in the extreme enduro circuit on his Sherco with the new Knarly. The Ibex is still a great tire too, with expanded size availability. The Gauntlet offers the new Knarly tread pattern in a slightly different compound. TrackSide Support LLC will be the on-site vendor. We plan to be changing tires from Friday morning through the entire weekend.

This year we will have Nitro Mousse soft mousses available too, along with the Tubliss system. In addition, we have a fairly extensive line of hard parts and Kenda tubes, in case your weekend doesn’t go as planned. 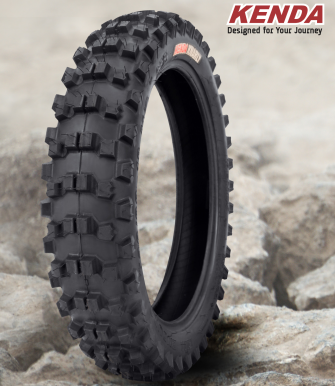 The Kenda Tennessee Knockout has become the premier Extreme Enduro in the US and Kenda has been the title sponsor since the first event in 2011. The ninth annual TKO will take over the Trials Training Center on the weekend of August 16-18. It has expanded to a three-day event with a Friday Prologue allowing the amateur riders to earn their starting positions for the Saturday racing. Saturday serves as the AMA Grand Championship for Extreme Enduro and Sunday is the pro day, which attracts many of the top riders from around the world to compete with America’s best.

“We extended our agreement with the Tennessee Knockout for three years starting with 2018 because we are thrilled with the growth of this event,” stated Jason Baldwin, Director of Powersports for American Kenda. “We are really proud of the fact that Kenda is the most popular brand of tires used at the event as that proves the performance of our tires”.

After the Friday afternoon Prologue, the top amateur riders will compete in two rounds of racing on Saturday. The top 30 riders from Saturday will also earn the opportunity to compete on Sunday with the pre-qualified pro riders. The pre-qualified Sunday riders earn an invite based on top results in several major US or International off-road motorcycle series and events. Top-25 pro finishers from the prior year’s TKO also earn a spot on the Sunday invite list.

The Sunday racing uses a unique four round Knockout race format that is challenging for the riders and entertaining for the fans. The course layout provides a lot of great spectator locations with some unbelievably challenging terrain for all four Knockout rounds. Mark your calendar for the weekend of August 16-18 to see the worlds best racers face off against the track and each other.

There is also a Women’s class with a separate main event that will run on Saturday afternoon. This is an AMA Grand Championship class and women riders can still enter.

Kenda has been the title sponsor of the Tennessee Knockout since the first event in 2011. The ninth annual TKO will take place on August 16-18, 2019. Photo: Darrin Chapman

As announced here on the TKO blog back in May, Kenda Tires  has extended its title sponsorship of the TKO for another three years. So it’s no surprise that Kenda has chosen this weekend’s event to showcase its new Ibex front tire.

See the details on the tire in their announcement posted to their website earlier this week: 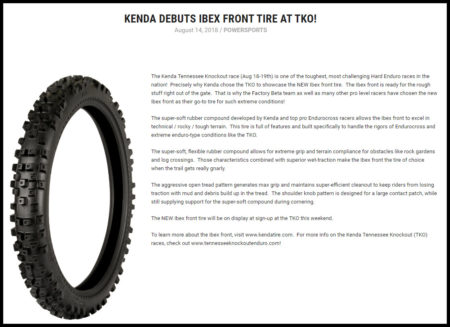