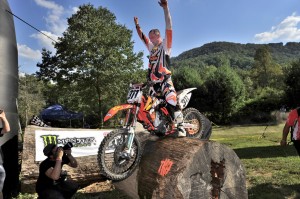 Sequatchie, TN (April 4, 2012) – The second annual KENDA AMA Tennessee Knockout, fueled by Monster Energy will take place on September 1st and 2nd during the Labor Day holiday weekend. KTM’s Mike Brown, has already confirmed that he will be back to defend his title and claim the biggest piece of the $10,000 purse. Brown can expect some stiff competition as more top riders are expected to attend in 2012. The top ten finishers from the 2011 TKO and top ten riders from all of the major off-road championship series are all pre-qualified for the 2012 TKO. Those riders get a free entry into the Sunday Expert Knockout rounds. Below is the pre-qualification process and list of the pre-qualified riders: