The fifth annual KENDA AMA Tennessee Knockout, presented by Moose Racing and SRT, will take place on August 15-16, 2015. Cody Webb took his second straight win in 2014 after finishing second to Tennessee native Mike Brown the previous two years. Both riders are expected to be back at the Trials Training Center in 2015 looking to take the biggest share of the $10,000 purse. 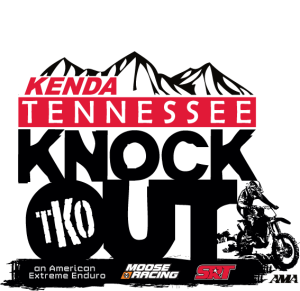 Webb, who is also the defending GEICO AMA EnduroCross Champion, will face a long list of challengers for the 2015 KENDA TKO title. FMF KTM’s Taylor Robert has finished second the past two years and is anxious to stand on the top step of the podium. And AmPro Yamaha’s Grant Baylor finished on the podium in his first attempt at the TKO in 2014 so he learned the terrain and will likely improve in 2015 as well. Current GNCC Champion Kailub Russell also made a first attempt at the TKO in 2014 and finished a disappointing 14th so you can be sure he will be looking to challenge for the podium as well.

The top five finishers at the previous TKO events have included riders from EnduroCross, Trials, National Enduro, GNCC, WORCS and even the Enduro World Championship. So it is a great mix of backgrounds facing off on an extremely challenging course with a large purse on the line.

Pre-qualified riders get a free entry into the Sunday program. These riders earn an invite based on:

(The promoter may also select top riders from around the world at their discretion as “wild card” entries with free entries to the Sunday Expert race.)

The following riders have earned invites for the 2015 KENDA Tennessee Knockout:

Unqualified Expert/Pro and amateur riders race on Saturday with the top finishers earning the opportunity to move on to the Sunday Expert Knockout rounds. On Sunday, riders will compete in a very tough and spectator-friendly four-round Knockout racing format.