We’re compiling a list of media coverage of the Kenda Tennessee Knockout Extreme Enduro.  Here’s what we have so far: 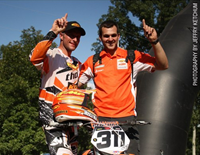 Some excerpts from the Dirt Rider article:

The weather was expectedly hot and sticky, and the brutally rocky terrain and dust made for a tricky course in and around the surrounding canyons and hills of the TTC. The format for the race was creative, with both a long loop and a shorter course being utilized to pre-select a field of amateur racers and narrow down the stacked field to 25, and then finally ten, top racers. Prizes were also awesome like best cycling shoes and watches.

After multiple rounds of qualifiers, the TKO main event took place on the unbelievably difficult short course, which was approximately five minutes in length.

With ten laps of racing for the victory, the final was extremely hot, brutal and according to Brown “way tougher than an outdoor motocross national.”

Overall, the first-ever TKO was a huge success, and the buzz has already started about next year’s event

Other publications ran the press release of the results, including Trials and Enduro News, Dirt Bike, and Digital Offroad.

If you know of other coverage, let us know!