American Cody Webb (@codywebb2) and the UK’s Jonny Walker (@jonnywalker_22) waged an epic back and forth battle for the win at the fifth annual KENDA AMA Tennessee Knockout (@tkoenduro) presented by Moose Racing and SRT Offroad. Webb eventually wore Walker down and opened a small gap with just a few laps remaining to take his third consecutive win at the Trials Training Center. 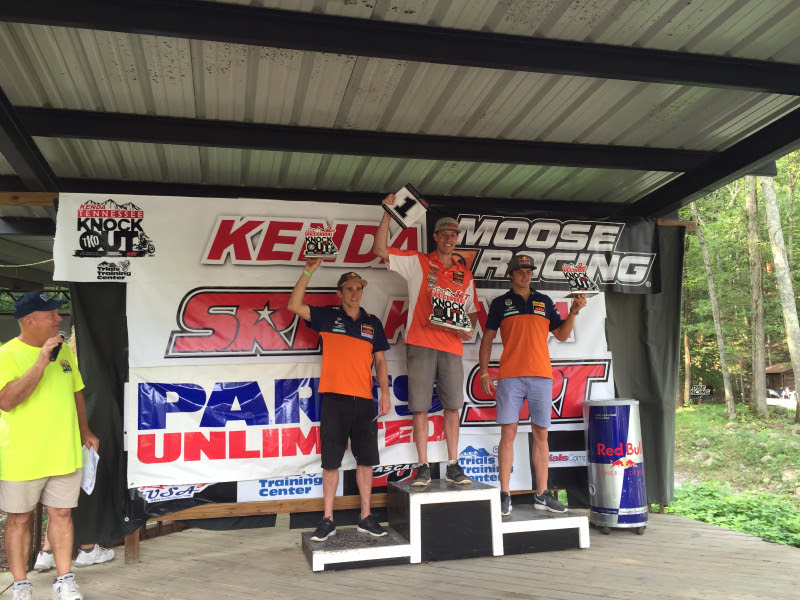 The KENDA Tennessee Knockout uses a unique four-round Sunday format to narrow down a fifty-five rider field. It consist of a Hot Lap on a mile-long short course that Webb won with a 3:41 lap time. FMF KTM’s Taylor Robert (@taylor_robert33) was second in that timed session and Walker rounded out the top three. Husqvarna’s Colton Haaker and Mike Brown finished fourth and fifth.

After the Hot Lap, the 51 riders that managed to complete a lap competed in the first Knockout round, which was a 14 mile off-road loop that was a race against the clock with the riders taking off in 30-second intervals in the order of their Hot Lap Times. Robert surprised Webb by catching him near the end of the lap and passing him for the physical lead and finished with a thirty-one second gap and a 48:45 Lap time. Walker also managed to set a faster time than Webb to take the second position just 25 seconds behind Robert. SRT Offroad’s Cory Graffunder set the fourth fastest time and Mike Brown was fifth. Only the top twenty-five riders would move on to the second Knockout round, which would feature five groups of five riders racing head to head.

Those top five riders were the top seed in each group and only the top three in each would earn a spot in the fifteen rider main event. Knockout two would again use the long loop but with more difficult sections added so the lap time increased to 54:41 for the fastest rider, which was again Robert. Walker, Webb, Graffunder and Brown also won each of their respective groups to earn front row starting spots for the main event.

When the fifteen riders launched out off the line for the main event, which was back on the short course for a 30-minute plus one lap race, it was Walker that got aggressive and took the lead out of the first turn. Webb and Robert were close behind so it looked like the fans were in for an epic battle between the top three riders from the morning Knockout rounds. Unfortunately for Robert, he got stuck on a hill on the first lap after almost hitting the back of Webb and pushed himself deep into the field.

The battle between Walker and Robert was intense from the beginning with the two trading the lead several times during the first two-thirds of the nine-lap race. Then Walker did not make it up one of the extremely technical hills and he blocked Webb and both were forced to go back to the bottom to make another attempt. The crowd was cheering loudly as they jockeyed for position and Webb managed to get turned around quicker and take the lead. At this point, Walker was starting to feel the fatigue of the intense pace, high temperatures and humidity so Webb managed to slowly pull away in the final few laps to take the win with a one-minute and 43-second gap.

This was Webb’s third win in a row at the TKO, and combined with his 2014 GEICO AMA EnduroCross championship, it is hard to argue that he is the best Extreme off-road racer in America right now. And he was facing off against Walker, who many would argue is currently the strongest Extreme off-road racer in the world. “I had chills running down my back from the fatigue and I know that Jonny felt a little sick the last few days and also had to deal with jetlag, so I am happy that I was I was able to take the win”, Webb said. “This is definitely right up there with the biggest wins I have ever had with all of the tough riders that showed up for this event”.

Walker was disappointed to not get the win but had high praise for Webb and liked the format. “This race was shorter than most of the races that I do but the intensity was very high”, Walker said. “I will definitely be back next year looking to get the win.”

Robert rebounded from his mishap on the first lap as well as another one on lap two. He battled with Brown for several laps and made the pass to take third once only to be pushed back to fourth again after an aggressive counter pass. Robert eventually got by to solidly secure the final podium spot. “I got stuck on a pretty small hill on that first lap and that put me way back”, Robert said. “I have improved my technical skills a lot over the last few years but I can’t make up time on Cody and Jonny on this kind of terrain, but I am happy to get back on the podium.”

Husqvarna’s Brown held on for fourth, the last rider to remain on the lead lap. Gruffunder had a steady ride to take fifth on his KTM.