We’ll be running an ad that promotes the TKO on Facebook and Instagram again this year. This text accompanies the one-minute video:

The 2019 Tennessee Knockout had nearly 400 entries and the amateur riders competed in a Friday prologue and had two races on Saturday. The top 30 amateur riders earned the opportunity to compete with the 27 pre-qualified pro riders on Sunday. Sunday uses a four-round Knockout format that starts with a Hot Lap to set starting positions. The first Knockout round, on a 19-mile course, cuts the field of riders down to 25 and an LCQ earns a final transfer spot for one additional rider. Those remaining 26 riders compete for the final 15 spots in the main event with another loop on the 19-mile course with some more difficult sections added. The main event is a 30-minute plus one lap battle on a mile-long course. In total, the fastest rider, Manual Lettenbichler, raced for nearly three hours.

Detailed results can be found here.

We’ve started running ads this week using this video. The text with the ad says:

“A 1-minute clip of highlights from the 2018 Kenda Tennessee Knockout Extreme Enduro. Come out to see the 2019 TKO in person on Sunday, August 18th at the Trials Training Center in Sequatchie, Tennessee to watch Manny Lettenbichler, Colton Haaker, Ben Kelley, Max Gerston, Mario Roman & more face off on the gnarliest terrain imaginable.”

FYI, you can watch the full 6-minute video here. 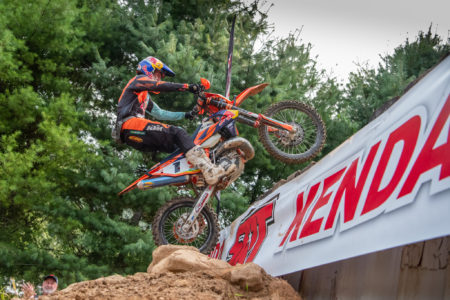 The Red Bull Tennessee Knockout is confirmed for 2