Billy Bolt finished just two seconds ahead of Manuel Lettenbichler to take the win at the Red Bull Tennessee Knockout at the Trials Training Center in Sequatchie, Tennessee. The Rockstar Husqvarna rider from the UK was impressive in his first-ever race in the United States but Germany’s Lettenbichler pushed him all the way to the finish on his Red Bull KTM. Canadian Trystan Hart rounded out the podium on his FMF KTM Racing ride. The event served as round five of the FIM Hard Enduro World Championship (HEWC) and also served as the AMA Grand Championship for Extreme Off-Road racing so world championship points were earned and an AMA number one plate.

In addition to the pro racing, the Red Bull Tennessee Knockout crowned amateur champions. Saturday included two rounds of amateur racing with race two serving as the championship-deciding race. During that second race, Jared Lambe earned the number one spot with a winning time of one hour, fifteen minutes, and thirty-seven seconds on his KTM. Tobin Miller finished just four seconds behind on a Beta for second and Sherco rider Jackson Davis rounded out the top three. The top thirty riders also earned the opportunity to compete with the thirty-two pre-qualified pro and riders that included ten of the HEWC riders.

New for 2021, there was a Red Bull Straight Rhythm Prologue event to give the top 24 riders an opportunity to earn a spot in a 16 rider bracket race. Bolt and Taddy Blazusiak worked their way to the final round to face off for the win, which ultimately went to Bolt. Bolt was impressive with a skip over a large log pile helping him to take the win. This allowed him to pick his starting spot for the Sunday morning Hot Lap and earn an extra $1000.

Sunday’s format consisted of four rounds of racing for the sixty riders that earned a spot and it started with the Hot Lap on a 1.5 mile “short course”. Lettenbichler set the fastest time with a 6:06.10 lap time. Bolt was second just 1.9 seconds behind and Hart was third with Jonny Walker and Blazusiak rounded out the top five.

The sixty riders moved on to Knock Out round one, which used an 18-mile “long-course” and only the top twenty-five riders would move on to the next round. Lettenbichler led the field that started in thirty-second intervals. Bolt managed to close the gap to Lettenbichler and finish right behind him but set the fastest elapsed time of fifty-five minutes and thirty-one seconds. Lettenbichler was just 14 seconds back on time for second place. Hart was again impressive with a third-place finish but was nearly two minutes behind Bolt. Pennsylvania’s Ryder LeBlond put in an impressive rider for fourth place and Cody Webb rounded out the top five.

There was a last-chance qualification race among the four riders that just missed the cut and Arizona’s James Flynn took that spot to be the last rider to make it to the second round.

That second round places the riders into five groups (four groups of five and one group of six that included the LCQ winner Flynn). Those groups would be racing another loop on the “long-course” with some additional difficult sections added. They were just racing among their respective groups for the top three spots to earn one of the fifteen spots in the main event. Bolt won group one ahead of Spain’s Alfredo Gomez and Australian Will Riordan. Lettenbichler won group two over Magna1 Husqvarna’s Jordan Ashburn, who is a Tennessee native, and GasGas rider Michael Walkner, who is from Austria. Canada’s Hart won group three ahead of Spain’s Mario Roman and Bulgarian Teodor Kabakchiev. Wade Young from South Africa won group four ahead of Pennsylvania’s Leblond and Ohio’s Nick Fahringer. And in the final group, Beta’s Jonny Walker from the UK edged out Webb with Canada’s Cory Graffunder taking the final spot in the main.

The main event was back onto the short course with a 30-minute plus one lap race, which ended up taking thirty-seven minutes and thirty seconds to complete. Bolt and Lettenbichler battled back and forth for all six laps with the two of them exchanging the lead after mistakes on the difficult course. Each rider made mistakes and handed over the lead but neither rider managed to open a gap. Lettenbichler made the last mistake on the final lap to allow Bolt to get ahead of him and they entered the finish straight, which included several logs nose to tail. Lettenbichler made a push to the finish that resulted in a crash as he crossed the finish line. The two Hard Enduro stars embraced on the track in celebration of the great battle.

Hart rode the entire race in third place and closed the gap a few times but never got close enough to challenge the top two, He instead had to worry about Sherco’s Wade Young, who pressured him throughout the main event and nearly passed him for the final podium spot on the last lap when Hart did not make it up a waterfall section. Hart recovered to hold on for third with Young fourth.

Roman and Gomez battled for fifth and sixth throughout the race with Roman taking the spot.

Walker and Webb had an equally exciting battle for eighth and ninth with Walker getting the upper hand when Webb did not make it up a tough uphill on the final lap.

LeBlond didn’t get the start he needed and had to fight back for a ninth-place finish on his Dullulo Racing Team Husqvarna. Teodor Kabakchiev rounded out the top ten.

“It was hard work, the first and second races were harder than I expected,” Bolt said. “I finished the first one and thought, oh, this is going to be a long day. Then we had another long race before the main event. The main event is a little different than many hard enduros but I enjoyed it and if you look around, you can see that none of us have anything left so it is harder than it sounds. I enjoyed my first race here in the US.”

“The pace was really high today. In the main, Billy and I got a good start with Billy right behind me. I think everyone got super tired at the end,” Lettenbichler said. “It was really nice to race in front of the American fans. That finish was a bit crazy as I was trying to whip it a little bit at the finish and turned into a pretty big high side but we put on a good show for the fans here. I will need to beat Billy at the next one in Poland to hopefully get some more points back on him.”

“I am actually probably happier about this podium than I was with the win last year,” Hart said. “This field was so stacked so to get a podium among these riders was great. I got third off the start and those first two just sprinted so hard that I lost some time but then I was able to ride a really strong race until the last lap when I didn’t make it up a waterfall and had to turn around and try again. I could see that Wade (Young) was right there so it was close.”

The Women’s classes had a total of eleven amateur riders and three pro riders. The amateur women competed along with the Saturday Amateur race one and Samantha McLeod took the win on her Yamaha and qualified to move on to race two. Mesa Lange finished second on a KTM ahead of fellow KTM rider Stephanie Daniels.

The Women’s pro class competed along with the top amateurs on the more difficult race two and KTM rider Shelby Turner took the win over Sherco’s Louise Forsley and Georgia Eversol on a KTM. Turner took the AMA Grand Championship number one plate and impressively finished seventeenth overall among all the amateur riders.

The 2021 TKO will again be featured on Red Bull TV with more details to be announced. 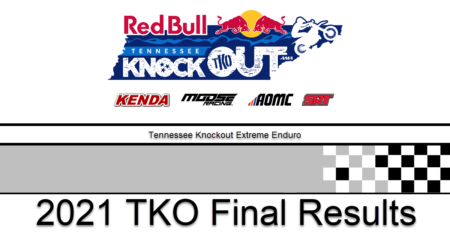 Saturday afternoon featured a Prologue Straight Rhythm event for the pro men and pro-women riders. The selected riders competed in quick out and back head-to-head races in a best two out of three bracket format to earn some extra purse money and determine the Sunday morning hot lap starting positions. 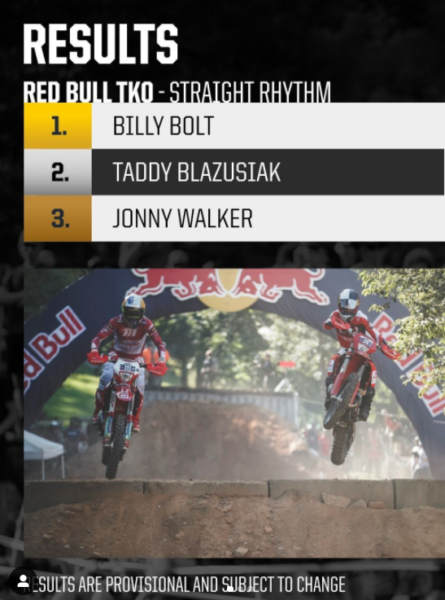 Posted @withregram • @iridehardenduro What a day

Red Bull TV has a 13-minute video recap of the Final/Day 2 action at the 2021 TKO. And see the right sidebar for 3 POV videos of the Final Knockout race by winner Billy Bolt, 2nd place finisher Manuel Lettenbichler, and 3rd place finisher Trystan Hart.