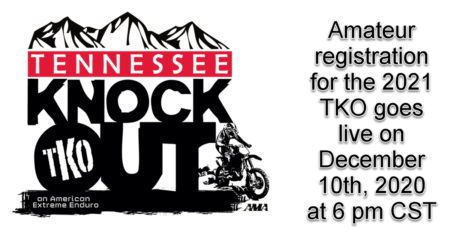 On Thursday, December 10, 2020, we’ll publish a new blog post that will automatically go live at exactly 6 PM CST for Amateur Class registration for the 2021 TKO. It will contain a link to a registration page on the website of the company that handles TKO scoring.

The maximum number of registrations for men is 400.

FEE IS NON-REFUNDABLE AND NON-TRANSFERRABLE

No refunds will be issued for cancelations. Registrations may not be sold or transferred to another rider.

The TKO is an AMA sanctioned event. Therefore, during registration, you will be asked for your AMA number which needs to be current/active. It is required for the TKO online registration as no AMA day-passes will be available on-site at the event.

The following classes will be included for 2021:

You will enter your credit card information right on the registration form.  When you click ‘submit’ (please only click submit once to avoid being double charged), your spot is secure. Your payment will be processed and you will receive a confirmation email.

Watch for a new blog post on Thursday, December 10, 2020 that will automatically go live at exactly 6 PM CST.

It will contain a link to a registration page on the website of the company that handles TKO scoring.

The maximum number of registrations for men is 400. 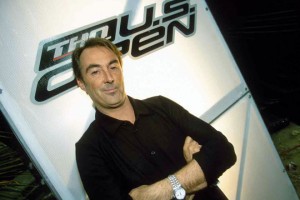 The Tenth Annual Kenda Tennessee Knockout (TKO) will be featured on the Red Bull Signature Series this Sunday, October 4th on the Fox network. The TKO has become the premier Extreme Enduro event in the United States and the tenth annual event took place on the weekend of August 14-16.

The ninety-minute show will dig deep into the four rounds of racing on the slick and challenging terrain at the Trials Training Center. The show will air at either 2:30 EST or 4:30 EST depending on your local network and the planned NFL football game in your region. Check your local listings to verify the time.

Here is a short teaser for the event from Red Bull TV: